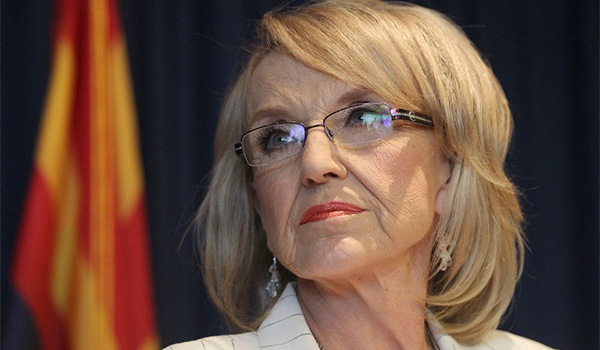 We’ve had a month now to reflect on the fiasco that was Gov. Jan Brewer vetoing a bill that would have strengthened protections for religious freedom in Arizona. So many things were wrong about the whole debacle.

Only one side got its message out — and that was a message of lies and distortions. Yet the homosexual pressure groups and their compliant media easily rode roughshod over a jittery, wobbly-kneed governor and Republican lawmakers.

Where were the co-sponsors of the bill? Where was their press conference? Where were their efforts to counter the lies?

In the end, Gov. Brewer was pressured — like a skittish young bison calf surrounded by hungry wolves. She went into stampede mode and was no match for the “predators.” She never took the time to explain what the law was really about, how it amended an existing law, why it was needed, and why it was not the threat the radical leftists were screaming about. All she did was react to the people with the loudest, angriest voices. It was pure knee jerk reaction and cowardice. She froze like a deer in the headlight, then cut and ran. The Left is probably shocked at how easily they intimidated her.

World magazine’s Mindy Belz posted a superb analysis of what happened. Following are portions of her March 22nd commentary:

Arizona has had its own RFRA [Religious Freedom Restoration Act] since 1999. The now tarred-and-feathered SB 1062 would have modified it two ways — covering residents in the conduct of their businesses, and covering them when sued by a private citizen invoking state or local law. To label it an “anti-gay bill” as most media have done is like calling the sun anti-gay for shining on homosexuals and heterosexuals alike.

To be sure, Arizona’s amended RFRA could have been invoked should a Christian florist be taken to court by the state attorney general for refusing to provide flowers for a [homosexual] wedding, as is happening in Washington state. But nothing in the Arizona amendments would have said who wins such a case, and religious adherents — as in all RFRA laws — have to demonstrate they possess a “sincerely held belief” that’s being needlessly violated.

The capitulation of Brewer, a conservative and a Christian, is both monumental and understandable. To veto the law she had to ignore the advice of 11 of the most eminent American legal scholars and jurists. Their Feb. 25 letter to the governor declared the bill “egregiously misrepresented” by its critics, enacting “a broadly applicable standard” that would uncomplicate litigation. The signers, including Harvard’s Mary Ann Glendon and Stanford’s Michael W. McConnell, noted, “Some of us are Republicans, some of us are Democrats. Some of us are religious; some of us are not. Some of us oppose same-sex marriage; some of us support it.”

But in the end, SB 1062 wasn’t about the law. It was about jackboot politics and the growing economic clout of LGBT groups. The NFL threatened to move the 2015 Super Bowl elsewhere, and the prospect of hosting a 2016 presidential convention seemed threatened. Arizona chambers of commerce and the state’s leading newspaper all came out against it, saying it would destroy business in an already stalled economy.

Bewer claimed in her veto that SB 1062 was a solution that doesn’t exist. Yet.

Indeed, it was all about jackboot politics and the fascist tactics of the Left. They will only be emboldened the next time the legislature passes a bill to protect religious freedom. And how many more “Brewers” are there in the legislature who will be too fearful of the Left to protect religious freedom? Some of them, Bob Worsley and others, have already showed their face, and there will be more. Further proof that radio commentator Dennis Prager is right when he says: “Democrats are the party of evil. Republicans are the party of stupid.”

As for the NFL, Commissioner Roger Goodell has become a shill for the homosexual agenda. Arizona was never going to lose the Super Bowl. He was bluffing in order to intimidate the governor.

As for the chambers and big business, they are totally in bed with radical causes — because they fear pressure groups and boycotts. That’s why Big Business more often than not yields to demands for activities under the corporate flag for homosexual employees. As Jonah Goldberg asked in his book “Liberal Fascism” …

If big business is so right-wing, why do huge banks fund liberal and left-wing charities, activists, and advocacy groups, then brag about it in commercials and publicity campaigns?

Goldberg could easily have included a lengthy list of other corporations besides banks. Leftism among corporations is rampant. The Arizona Chamber of Commerce is no different.