If you support Big Abortion then former doctor Hiral Tipirnini is your vote for Tuesday’s special election in Arizona’s Eighth Congressional District. Here’s her view on Big Abortion:

I fervently believe our elected representatives should support policies reflecting clearly established women’s reproductive health rights. In short, abortions should stay safe, legal, and rare. And, for the record, no one is “pro-abortion” – one is essentially either pro-choice or anti-choice.

Tipirnini is a firm supporter of Planned Parenthood, even though that corrupt organization has been:

The former doctor’s TV commercials show her joyfully consulting with patients in a hospital, but this is a dishonest portrayal. She admitted to Channel 15 News that she has NOT treated a patient since 2007. Still the commercial is airing on TV, deceiving the voters.

She settled in a malpractice lawsuit brought against her leaving her medical practice.

The malpractice lawsuit was filed by a Phoenix woman, Belen Carrillo, before her death.  Carrillo claimed that Tipirneni and a physicians employee group failed to give her a medically necessary tetanus immunization while treating her for a leg wound in 2001. According to the plaintiff’s lawyer and son, Carrillo, then 72, contracted tetanus, ended up in a coma for weeks, and suffered kidney failure. The lawsuit says Carrillo sustained “permanent injury and disability.”

During a debate, Tipirneni announced her agenda to push Medicare for All – a program that will bankrupt Social Security, leaving one in six Arizonans without benefits. As a former ER doctor, she should know better. Hiral Tipirneni’s disingenuous commitment to healthcare simply to win an election will end up harming thousands of Arizonans. 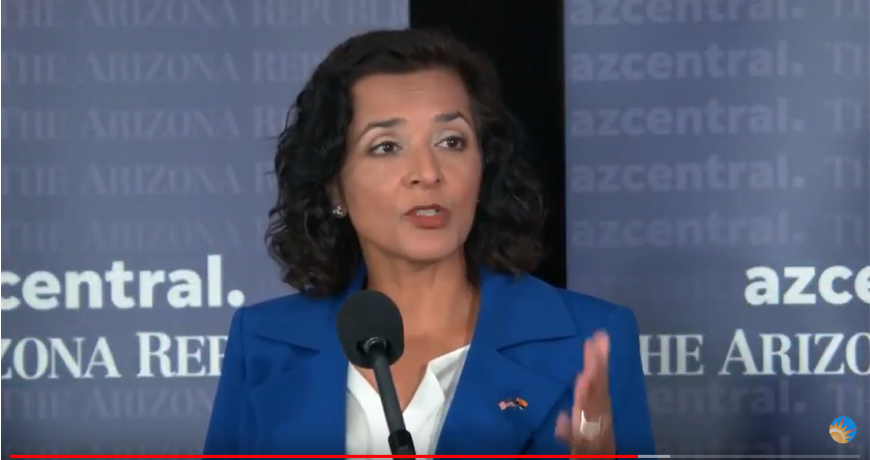 “Hiral Tipirneni has demonstrated a blatant disregard for the well-being of Arizonans, first hiding her malpractice lawsuits and now prioritizing  Medicare for All to the detriment of Social Security. Medicare for All will completely bankrupt the Social Security program, and as a former ER doctor she should know that. You would think an ER doctor would fight to protect people’s benefits, but Tipirneni seems only concerned with winning an election.”The Democratic candidate for Arizona’s 8th Congressional District, Dr. Hiral Tipirneni, claimed to “not be about party lines,” but then said “the real fight is with the GOP agenda.”

This candidate is a fraud and her campaign is a complete charade portraying her as someone she is not. But now you who she really is.

It’s clear that Debbie Lesko is the deserving candidate for Congress.